I looked at the map.

For the sake of direction, not destination. 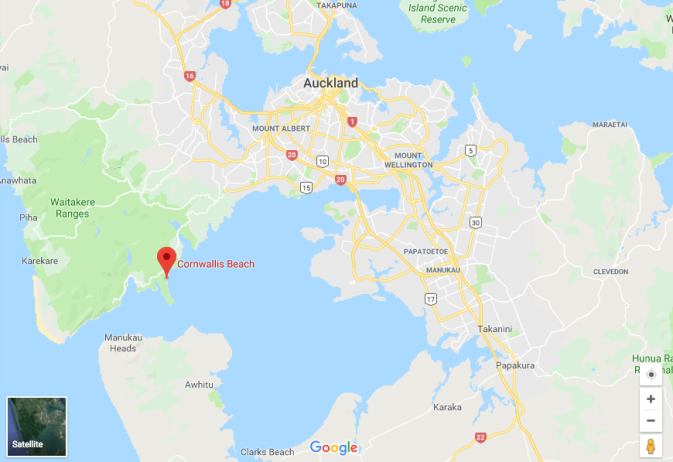 The day was Monday and free as butterfly, and I chucked Dune, my notebook, a Tupperware container of rice, an extra sweater, and my colored pencils in my backpack and cycled to the train station.

My launching port would be the Glen Eden train station.

Thus equipped, I hopped aboard: 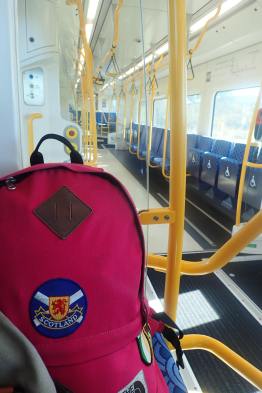 I had mulled over the prospect of catching a bus part of the way to Cornwallis, as the walk was estimated at 4.5 hours, but as I hopped off the train it started to drizzle and I had too much fun being adventure woman to spend time finding the correct bus.

I proceeded due south, twisting and turning through the Glen Eden suburbs, launching myself away, away from the city center, from civilization, from all intents and purposes. Occasionally I consulted maps.me (an excellent offline map) for direction.

Maps.me obviously has a flair for the wild.

I would turn left onto a street that looked very much like a cul-de-sac. Warily I would approach the semi-circle of houses, consulting the map, seeing that little blue Josie was on the dotted path. And then there would be the tiniest of a woodland path, right between the yellow house and the fence of the blue house.

I found myself, twice, in the middle of a random forest. Brilliant! 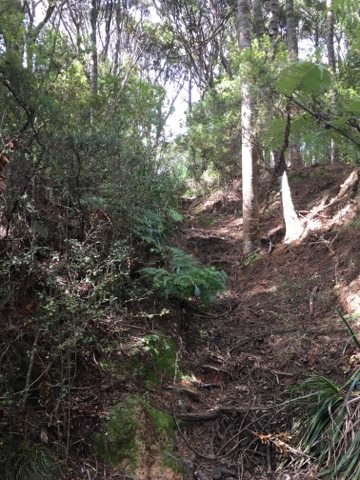 2 hours of walking and a hill later, I was walking along a ridge. Waitakere range trees lined the road, and then, to my left, the trees parted to reveal why it was named Scenic Drive:

I promptly forgot all about my arbitrary end point, closed out of maps.me, and ambled my way towards the slice of coast my finger couldn’t stop pointing at.

I followed the sun, for the most part, knowing that I wanted to go south with a southwest attitude.

So I took the opportunity to climb Mt. Atkinson.

My efforts were well rewarded.

I swung myself up onto a wooden fence and munched an apple as I stared at the glory of a kiwi coast on a fine spring Monday.

Properly refreshed, I jaunted down the mountain and continued my south-by-southwest direction. An hour later I came to the suburb of Titirangi.

I followed my nose to a street sign that read, “Titirangi Reserve Drive”, and knew it was destiny when a library lay along the road to my left.

Of course I went in.

The building was composed of floor-to-ceiling windows, and the librarian behind the desk was playing Run River North’s “29” on his ukelele. I strolled through the aisles of nonfiction books, found Ragnar Axelsson’s Behind the Mountains, a photo book of Iceland’s rugged peaks. I then spent the next half hour absorbed in Icelandic shepherding. Found a book of Billy Collins poems, which I of course checked out.

The librarian ceased his strumming, and I left the library.

My feet took me places, occasional rain kissed my hair, I waved hello to a man in an orange vest who was attempting to eradicate the kauri diebeck disease from the Waitakeres Ranges. God speed, friend. 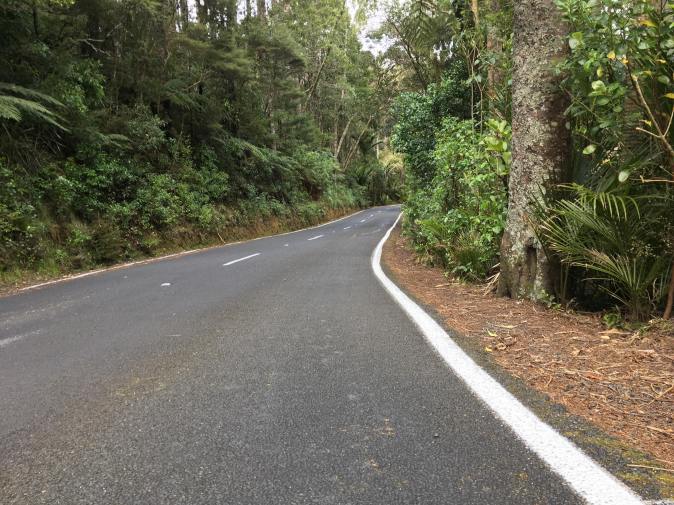 And then I arrived.

Titirangi Reserve, with the tide out, so I could side step seashells and tunnel my way along the ridge. The temperature had dropped, but thankfully my knees were warm, so I pulled them in for a long hug and ate my rice and watched the water swirl. 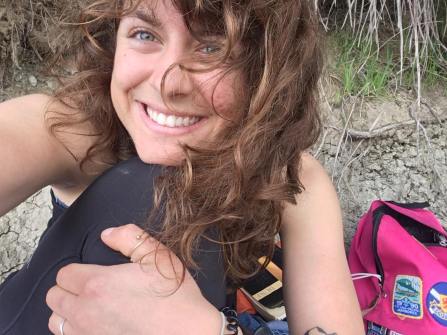 I oscillated between Dune and Billy Collins, wrote poetry when it started to flow. Sometimes just stared at the water. Contemplating breath. Musing about the negative connotation of the word “lonely”, because I was having a grand time, and I was alone.

When a particularly catchy piece of verse came out of my bones, I would relax my jaw and tap twice on my chin (sounds remarkably like a microphone, try it) and call the birds to attention. Then I would read the verse as loud as I could in whatever accent came to mind.

After two hours, the temperature really dropped, and I decided that walking back the hill I had just come frolicking down sounded nice and warm.

So I picked my way back along the reserve. 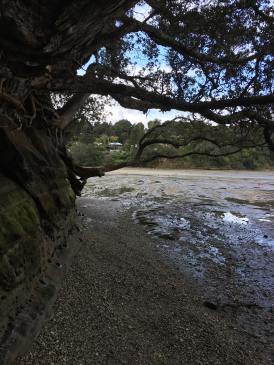 The rain started to bucket right as I passed the library, and, as the poetry was really starting to unknit, I tucked myself outside a cafe for a long black, a chocolate cookie and a proper viewing of the pouring rain.

A man in a black vest with a dog came by. The dog, a chill pooch if there ever was one, laid down by the cafe sign, his head gently on his paws, as his owner ducked inside for a coffee and croissant.

I watched as pedestrians would stroll by, double-take at his cuteness, and reach out to give him some love. He never flinched. Not once. Never once did his raise his chocolate eyes to acknowledge their outstretched palms.

I was impressed by his candor.

And flattered, beyond measure, when he kept raising his head up to look at me. Give my direction a sniff. There was a long period where we locked eyes, and he gave me his blessing to pretend he was my dog.

Which I did, with vigor.

I wrote some poetry for an hour and a half, tucked in next to the daffodils peeping out of the flower shop next to me. My dog kept me company. Until he left with his owner. The rain poured and my coffee was electric.

I ended my adventure by whizzing back to Glen Eden in bus 172, which took me along a different route. Titirangi would be the perfect place to launch from next time if I wish to continue my direction towards Cornwallis Beach.

But the destination is arbitrary, eh? It is the freedom to follow the pointing finger that matters.

As I get the space to wander aimlessly, to choose this street, then this woodland path, then this city, then this country, I’m coming to find:

I grow less fond of the things I don’t want.

Is that self-exploration? Growth? “Finding Myself”? Dunno. But it’s infinitely comforting.

I don’t usually take many pictures on these little adventures. So for the visually minded of you (lookin’ at you, mom), enjoy the views.

← I am an Alphabet
Uphill →