The Art of Sleeping on Public Transportation

Except the ability to sleep well on a train.

That is most definitely innate and predestined.

There are simply those who can sleep well on trains and those who definitively cannot. There is no sense in practicing anything, because in this case it has long been decided for you. You cannot learn to sleep well on a train. This is not something that can be taught to you.

I was traveling by train to Bogor, Indonesia last Tuesday and I was given the pleasure to witness this art form in action. 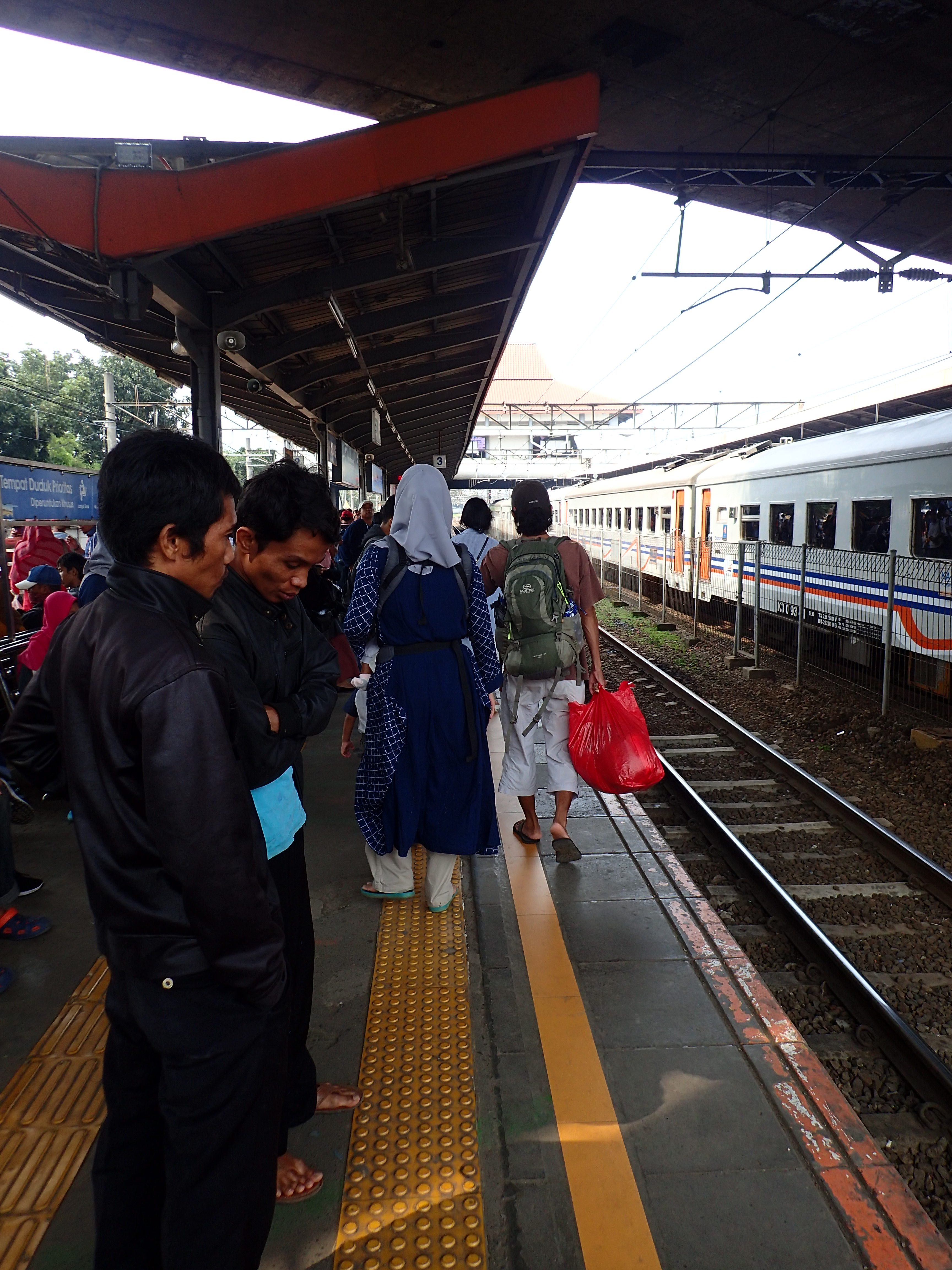 I snuggled myself in the cushy blue velvet seats of the woman’s car (the first and last carriage on the train), and after thirty minutes of a rocking, sunny lull 40% of the carriage inhabitants were dozing. 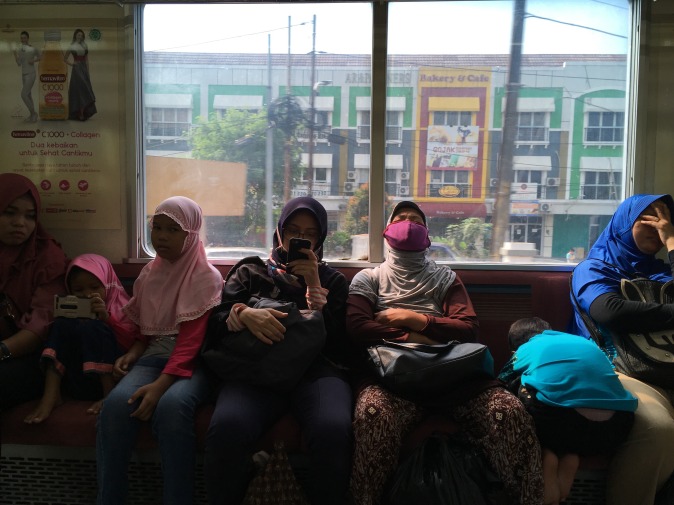 I wanted to applaud the woman across from me (the one sporting a fetching pink mask) for her immaculate posture. Head resting back, arms tucked in, body aligned head-over-heart-over-pelvis. She remained that way too, perfectly aligned, perfectly balanced. I couldn’t stop watching her, she was sleeping so well.

The woman directly next to me was Blessed Sleeper’s juxtaposition. She was like a fish out of water, flailing to and fro, head leaning towards my shoulder leaning closer closer leaning towards my shoulder getting closer when jolt! her subconscious would reprimand her and jerk her back to alignment. She lacks the sleeping well genes, I thought to myself.

If the sleeper is tiny, like the little boy in the blue t-shirt, the sleeper may curl his or herself up and sleep in that manner. Infinitely more comfortable than proper alignment. Alas, that stage of comfort only lasts seven years or so and what are you going to do with the remaining years?

I related most directly with the woman flopping herself next to me. I lack the sleeping-well-on-public-transportation genes. For long-standing proof of that, here is an excerpt from “Dorothy Got Lucky with the Tornado: A 78-Hour Journey Back to Kansas” on my account traveling from Rome to Ljubljana on a night bus:

I scale the steps into a second flixbus, this one destined for Ljubljana, capital of Slovenia. I choose my seat wisely: perfect distance from the bathroom, comfortable enough to produce a restful night’s sleep, east of the bus for a good sunrise viewing.

And see, I’m a floppy sleeper.

Sometimes I wonder if I weren’t the inspiration for the “whip my hair back and forth” music video.

A half hour into the haul we make a stop, and a tall, gangly gent climbs on board, over-eager with his thumbs hooking around the straps of his backpack. We make brief eye contact: this is bad.

There are certain tactics you have to learn to if you want a successful, smooth long-long-soverylonghowmuchlonger bus ride: you can be friendly to the other passengers (indeed, should be friendly, they’re human beings after all) but not too friendly. You’ve got to be just the riiiiight amount of unapproachable to deter anyone from sitting next to you.

At the time of above-mentioned eye contact with Gangly Gent, I am nodding along to some Nina Simone. Gangly Gent gets the idea that my nods and eye contact were to be interpreted as, “come join! Let’s be friends forever!”

He makes his way up the aisle, locking eyes with the seat next to me, and the entire time my eyes are slowly squinting and my eyebrows are slowly knitting in a last effort to subconsciously deter deter DETER!

Finally he gets close enough and my facial features relax into the societally-appropriate “you’re a human, I’m a human” expression. He sits next to me, we shake hands, I attempt to subconsciously warn him of my sleep-flop disorder.

Fast forward about four hours: it’s midnight and I awake with a start, my head very INAPPROPRIATELY making a home against his upper arm.

Blissfully, he’s passed out. Or dead. His neck bent at a bizarre angle, head back, mouth cavernously open. His breathing sounds like an asthmatic cat attempting to purr.

I lightly wind my head back to the center, softly wiping off the little drool spots that have blossomed on his sleeve. And we fast forward about four more hours:

It’s three a.m.  I awake with a start, my head AGAIN nuzzling against his arm. Sleep flop! I panic and check his face: nope, still dead. Crank crank crank, wipe wipe wipe–leave no trace, Josie, just like the woods–and we’re good to go.

I would hope that one day I could learn the art of sleeping well on public transportation, but I fear that will never be the case. It is simply not in my cards.

To you, if you be one of those preordained like Blessed Sleeper, I say enter into the circus or try and capitalize on your God-given gift. Not everyone is like you, you know. You could make a killing.

To you, if you be like me, I say always have tissues and apologies handy for wiping away drool and explaining your actions. Although it tends to be an ice breaker, so that’s a plus.

At the moment I am in Phuket Thailand fleeing the country of Indonesia so I can renew my visa for another go-around. The topic of artful public sleeping arose when I walked past someone who was sleeping like this:

I thought to myself, wow. I really get him. He and I are brother and sister in sleeping.

← Vagabonding to Thailand
The Journey →