When the Rubber Hits the Bunny

I was running and I kicked a bunny.

Just plowed him right in the noggin. His soft, fuzzy little noggin.

Before you think me a heartless beast, please read my account. And then, in order for you to remain objective in your critique, I have included the account of the bunny himself.

I like to run in the early morning, when the breath is still diamonds against an untempered world and irritated thoughts have not yet infiltrated the air.

I usually scoot into my gloves to prevent chapped knuckles–which doesn’t work, by the way, my knuckles always make it look like I’ve been in a terrible fight with a brick wall–and eat a Fig Newton, chased with cold-brew coffee.

It gives me focus and an alertness, ready to overcome obstacles and run like I don’t actually just want to go back to bed.

Usually I make it out the door around 0510, podcast downloaded and gps watch located.

Usually I begin running quickly to pulse the blood in my veins and stretch out my joints, then slow into a steady rhythm, able to be maintained for the morning haul.

Usually I do well side-stepping cracks and roots and dodging the stray cars that laze around in the wee morning hours.

But. On the day in question: Monday, November 27th, things were not so usual.

I woke up much later than my usual time as my morning commitment had been canceled. When I pushed myself out of bed, it was light out, which was unusual for my morning run. It was a cool morning and the sun had made it less brisk, so I cast my gloves aside. I was out of Fig Newtons, so I settled for some carrots.

I chased the carrots down with the dregs of cold-brew, wincing as my teeth chomped the gritty grounds. I was out the door by 0703, gps watch dead and podcast left undownloaded in favor of some meditative music.

I began lurching along on my usual route, up and around the cemetery in a 6.36 mile loop. My joints were stiffer than usual, and the blood was not flowing as quickly as it normally does. But, it was no matter; sometimes the end of the week yields these physiological responses.

At 0711 I passed the large blue house with a wrap-around porch on Highland street.

At 0721 I crossed the intersection of Merchant Street and Highland Street.

At 0727 I ran past the Emporia Country Club.

In the shadows grafted by the punishing streetlamps cutting into the morning, I saw the outline of a small creature, bulbous in the torso and with a long sharp head. It was ahead of me and to my right, running in a perpendicular direction.

Surely not, I thought groggily.

I could not register what had happened.  I could see the repression techniques my brain was engaged in during the rest of my run, finding my own mind defend itself against the traumatic event. I felt like a monster. And then, suddenly, I didn’t. I nearly forgot, in fact, about the whole of it.

Until I received an envelope in the mail about a week later, stating that I was being sued for “Unlawful Cranial Abrasions”, signed Dr. Thelonious Králičí.

Apparently the bunny I abraded was both a doctor and of Czech descent.

Would be the case, I thought groggily.

Now Dr. Králičí and I are engaged in a lawsuit. Most unfortunately, the good doctor is a doctor of Law and really knows his stuff.

From the Desk of:

It was a most unfortunate situation indeed, for not moments before the direct collusion, I was sitting in the parlor room dining on supper with my wife, Melissa, and my seventy-seven children, Jenny, Joan, Max, Ronald, Sam, Fliver,–for sake of space this portion has been omitted–simply enjoying our time together. It is rare, in my line of professional work, to have such moments to spare with my offspring.

At the resolution of our meal–I believe this to be between the minutes of 0520-05400–Melissa announced her intentions to make a carrot cake in celebration of my upcoming birthday. It was to be my 2nd birthday soon, and this declaration pleased me greatly, for us Králičí’s have a distinct and noble passion for the cake of carrot.

She began to prepare the carrot, creaming and beating and steaming as she does most marvelously, and shortly realized that she was at a loss for the proper amount of the fashionable root turmeric.

I hate to divulge our family secrets, but for the sake of extreme honesty within this disposition, I must: turmeric is the Králičí secret ingredient, passed to me through my forebunnies.

I had finished with the morning paper already and my stomach was pleasantly engaged in the digestion of our morning meal. In good spirits, I vowed I would secure her the precious golden root from our neighbors across the way.

I scuttled out of the door, focused on my mission: before I could blink, a gigantic smelly black sole was pummelting the anterior portion of my cranium. I know not where this abrasion came from, except from the sky if it were possible.

I lay in the danger-way, battered, belittled, besieged.

It was lucky that my youngest, Oliver, heard my moans with his supersonic ears, for he came to me before a vehicle could finish me off. He heaved me from the danger-way and sat with me against the grass.

He demanded a description of the aggressor from me, and with wheezes, I described the culprit. He summoned a selection of siblings and, armed with a camera and anger, he headed off the victimizer.

Oliver & Co. chased the devil to the intersection of Leafy Green Way and Worm Street and captured the following picture: 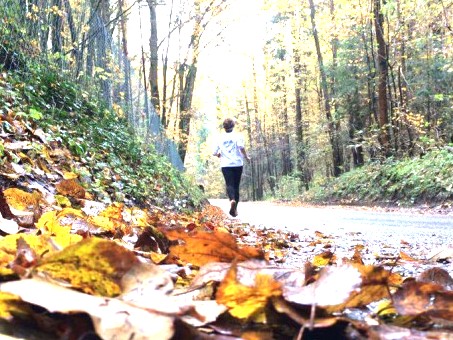 My friends–experts in the field–have identified the victimizer to be a Miss Josie Rozell of — Street, —–, KS, —- (removed for security reasons). I have engaged my top lawyers in this matter, for I feel most offended by the hit-and-run.

I will let you know how the lawsuit goes. The time being, please consider my case with an objective lens.