I awoke early on Sunday, December 11, having accidentally fallen asleep reading The Hobbit the night before, feeling buoyant in the amount of rest imparted and energetic in the literary residue of Tolkien.

A 55-degree Sunday (12 degrees Celsius for my metric pals) in the middle of December. The washing machines completely occupied, the majority of the city closed anyways and the homework can wait until Monday. Pair that with an insane amount of energy, and we find Josie popping over to Hauptbahnhof for a 44-minute train to Leoben, clad in Sorell hiking boots and munching on cashews. 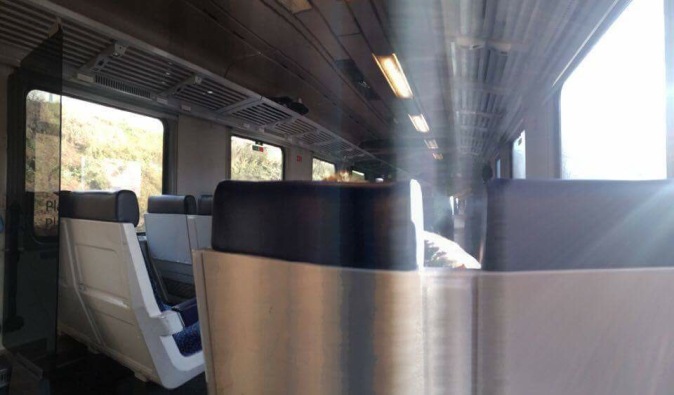 I had no inkling of an idea concerning how the day would play out; loosely googling “winter hiking spots in Styria, Austria” had somehow directed me to the good chance of trail heads spouting from Hafning near Trofaich, reachable by bus from the Leoben train station.

My arsenal housed half a wedge of brie, a pear, a few chocolate cookies and a package of unsalted cashews. My hiking gear was minimal, definitely not “winter worthy”; a light down jacket stuffed into my backpack alongside a pair of 1-euro black fleece gloves made up the backup gear to my Patagonia sweater I wore over a long sleeved shirt and black leggings combo.

Armed with a very vague notion of when the last Sunday bus departed from the station, I arrived in Hafning at noon and simply set off in the direction of the mountains.

Back in October, when my magical pal Katie and I were hiking through the Triglav forests in Northern Slovenia, we stumbled upon a contemplation of our perfect forest.

My friends, on Sunday December 11th, I found that forest.

Or rather, it found me.

I began my journey by rather aimlessly meandering down this one-lane country road, snaking around the base of looming mountains and trees and tucking in between Austrian cottages sporting ducks and hens clucking around the mossy gardens. The first somewhat-path-like trail I came up against, I took.

I’m fairly certain it was an old logging trail, the residue of tracks established by the tons and tons of weight of logging equipment chartering freshly de-rooted trees.

Minutes after my nearly vertical trek, I found myself speechless from more than physical exertion.

I was standing, small and yet somehow still significant, upon a soft mossy springboard encompassed by impossibly tall green-nettled pine trees, the scent of fresh cool air mingled with pine cones and dry forest floor wafting through my hair and into the pores of my very skin.

It was irrevocably silent.

Silence I have not felt perhaps in my entire existence.

Silence that was inclusive and welcoming.

Silence that invited me to join in the festivities of an empty and pure mind. 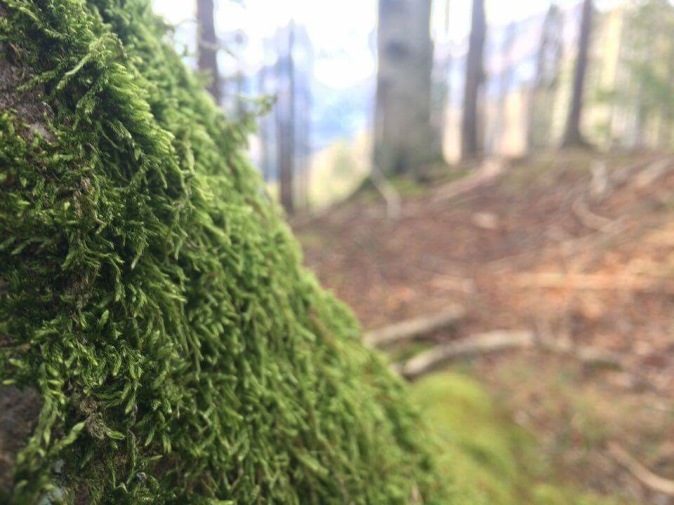 The air was cool and delicious and the breeze that caressed my hungry skin was warm and comforting. Every breath of this air was an honor, every intake was ambrosia.

For three delicious hours, my boots found their own way over white rocks and springy dirt on a raw yet well-loved trail which danced alongside playfully magnificent woods, beautifully and imperfectly spaced apart with the mossy green of life carpeting the undergrowth.

How can anyone say winter is a time of death, when this forest and this mountain exists?

The end of my hike featured an hour of vertically scrambling up snow-packed paths, clinging to the side of the cliff with my cheap fleece gloves. Just as my legs were beginning to wobble with the raw exertion of such a vertical ascent, I found myself perched on the top of the world.

No picture could ever do it justice.

The depth, the raw dimension of what I was witnessing…it made my head swim and my eyes dance with tears. The majesty of this view was something my brain could not even comprehend.

Finally coming to terms with dramatic oncoming of the early winter sunset, I eat my wedge of brie and slices of pear, blow the wind and the mountains a sturdy wet kiss, and begin the descent. 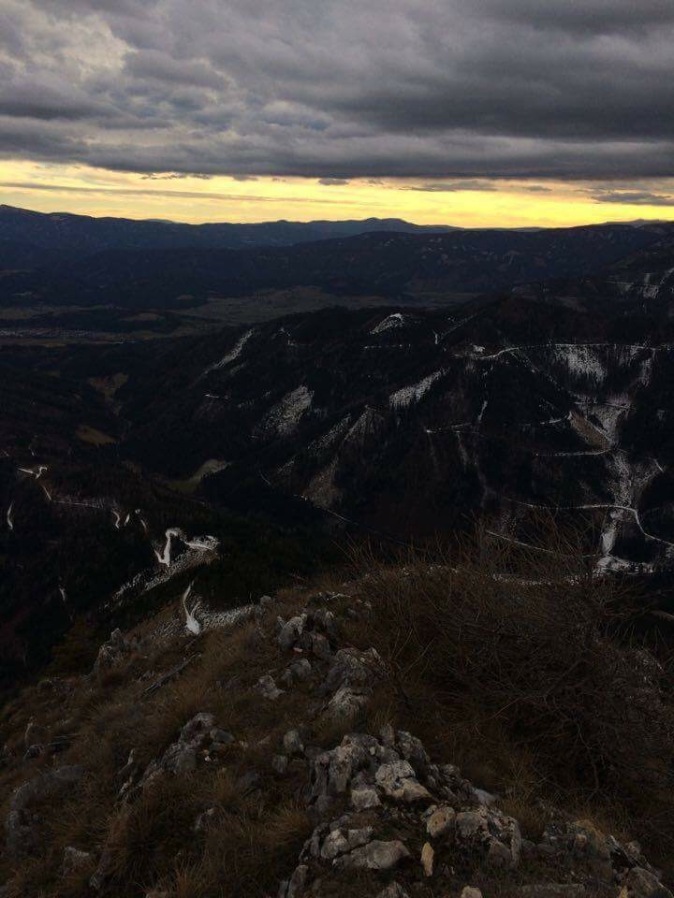 Exempting the direct descent of the first half hour off the peak of the mountain, the trail existed in such a beautiful decline as to offer me no choice but to let inertia take lead and give way to unfettered running.

So here I found myself, the sun setting on the most gloriously-temperatured December day, having had practically no human interaction, utterly having thought out of thoughts, wolfing down gulps of pure pine air and running down this mountain.

I have no concrete idea of how exactly I got up the mountain in the first place, no real notion of what time it was nor what time the last bus would leave.

Somehow–and I mean that in the most dramatic useage of the word–it all just worked.

My boots felt their way back to the old logging trails, dispatching me back on the beautiful one-lane country road a half hour before complete darkness. I meandered gaily back to the Hafning bei Trofaich bus station, the last bus to Leoben departing in three minutes.

Arriving warm and sleepy back in Graz, my body buzzing with the exertion of a seven hour hike, I duck into a long hot shower and warm up a pot of last night’s homemade vegetable soup. I prop my feet up on a wall and breathe into the glorious feeling of blood draining from my ankles as I listen to the majestic tones of opera music and treat myself to The Hobbit once more.

I don’t know if I will ever be able to find my forest again. Perhaps it only existed on December 11th in that Sunday, 55-degree state of mind. Perhaps it was only shown to me because I was completely alone and completely allowed to be completely mesmerized.

Perhaps because I had thought myself so utterly out of thoughts to let feeling and emotion have free reign.

Perhaps because I experienced the rawness and scathing beauty of being completely immersed in the moment.

Whatever it was, it is my absolute and dearest hope that whoever is reading this find it, too.

← A Note on Prolonged Suffering
If I Die, Sell My Ashes at the Flea Market →